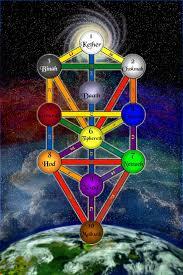 Mysticism in Judaism When non-Jews ask about Judaism, they commonly ask questions like:  Do you believe in heaven and hell?  In angels or the devil?  What happens to the soul after death?  What is the nature of God and the universe?  The answers to questions like these define most religions; in fact, some people say that the purpose of religion is to answer these kinds of questions.  Yet from a Torah viewpoint, most of these cosmological issues are wide open to personal opinion.  The areas of Jewish thought that most extensively discuss these issues, Kabbalah and Jewish mysticism, were traditionally not even taught to people until the age of 40, when they had completed their education in Written Torah and Oral Torah (in other words, in Bible and practical Law).

Mysticism and mystical experiences have been a part of Judaism since the earliest days.  The Bible contains many stories of mystical experiences, from visitations by angels to prophetic dreams and visions.  The Talmud considers the existence of the soul and when it becomes attached to the body.  Jewish tradition tells that the souls of all Jews were in existence at the time of the Giving of the Torah and were present at the time and agreed to the Covenant.  There are many stories of places similar to the Gentiles' heaven and hell.  The Talmud contains vague hints of a mystical school of thought that was taught only to the most advanced students and was not committed to writing.  There are several references in ancient sources to ma'aseh bereishit (the work of creation) and ma'aseh merkavah (the work of the chariot [of Ezekiel's vision]), the two primary subjects of mystical thought at the time.

In the middle ages, many of these mystical teachings were committed to writing in books like the Zohar.  Many of these writings were asserted to be secret ancient writings or compilations of secret ancient writings, and some probably are.  It is important to remember, however, that such secret writings that are not the results of public debate in authorative rabbinical courts must never be understood (actually misunderstood) as contradicting the laws that were openly discussed and properly enacted.  All too many Jews as a practical matter have rejected the law and have preferred to practice their misunderstandings of Kabbalistic books or their rabbis' misunderstandings of them.  This is simply inexcusable:  The proper subject for such writings is why we do what we do when we observe the Torah, not what we need to do to observe the Torah.

Like most subjects of Jewish belief, the area of mysticism is wide open to personal interpretation.  Some traditional Jews take mysticism very seriously.  Mysticism is an integral part of Chasidic Judaism, for example, and passages from kabbalistic sources are routinely included in traditional prayer books.  Other traditional Jews take mysticism with a grain of salt.  One prominent Orthodox Jew, when introducing a speaker on the subject of Jewish mysticism, said basically, "it's nonsense, but it's Jewish nonsense, and the study of anything Jewish, even nonsense, is worthwhile".  While we do not say that Kabbalah is nonsense, many things said in its name are clearly nonsense.

The mystical school of thought came to be known as Kabbalah, from the Hebrew root Qof-Bet-Lamed, meaning to receive, to accept. The word is usually translated as "tradition". In Hebrew, the word does not have any of the dark, sinister, evil connotations that it has developed in English.  For example, the English word "cabal" (a secret group of conspirators) is derived from the Hebrew word Kabbalah, but neither the Hebrew word nor the mystical doctrines have any evil implications to Jews.

Kabbalah is one of the most grossly misunderstood parts of Judaism. Some non-Jews (and even some Jews) describe Kabbalah as "the dark side of Judaism".  Many of these misunderstandings arose largely from distortions of the teachings of Kabbalah by non-Jewish mystics and occultists.  Kabbalah was popular among Christian intellectuals during the Renaissance and Enlightenment periods, who reinterpreted its doctrines to fit into their Christian dogma.  For example, one such source (the Kabbalah Denudata, commonly available in new age bookstores) states that the Ten Sefirot have something to do with the Christian Trinity because they are sometimes divided up into groups of three, despite that the Sefirot are divided up into many groups of varying numbers, that these groupings overlap, that the grouping he refers to is not comprised of a father, son, and spirit, but of a male, a female, and neutral, and so forth.  Others have wrenched kabbalistic symbolism out of context for use in tarot card readings and other forms of divination and magic that were never a part of the original Jewish teachings.

We do not mean to suggest that magic is not a part of Kabbalah.  The most hidden, secretive part of Kabbalah, commonly known as "practical Kabbalah", involves use of hidden knowledge to affect the world in ways that could be described as magic.  The Talmud and other sources ascribe supernatural activities to many great rabbis.  Some rabbis pronounced a name of God and ascended into heaven to consult with the God and the angels on issues of great public concern.  One scholar is said to have created an artificial man by reciting various names of God.  Much later stories tell of a rabbi who created a man out of clay and brought it to life by putting in its mouth a piece of paper with a name of God on it.  Some of these stories are no doubt untrue, at least as understood literally; but some are true.  However, this area of Kabbalah is known by very few, and practiced by even fewer.  One great rabbi has said that these practices should be totally avoided, except when the Temple stands; that seems very sound advice to us.

Ein Sof and the Ten Sefirot

To give you an idea of the nature of Kabbalah, we will briefly tell about one of the better known, fundamental concepts of kabbalistic thought:  the concept of God as Ein Sof and the Ten Sefirot.  This explanation is, at best, a gross oversimplification.

The true essence of God is so transcendent that it cannot be described, except with reference to what it is not.  This true essence of God is known in Kabbalah as "Ein Sof", which literally means without end, which encompasses the idea of His lack of boundaries in both time and space.  In this truest form, the Ein Sof is so transcendent that it cannot have any direct interaction with the universe. The Ein Sof is said to interact with the created universe through ten emanations from this essence, known as the Ten Sefirot.

The Sefirot are not deities, as some think by taking this too literally. They are God's separate created mechanisms for dealing with the world, and they are in contact with the universe in a way that the Ein Sof is not.  The Sefirot connect with everything in the universe, including humanity.  We would say that the point of the Sefirot is to give an explanation of how God really is ultimately in control of the world, sees all, and rewards and punishes as He sees fit; but he does this by way of these mechanisms, not directly.  And do not make the mistake of worshiping them or praying to them or by way of them, as all too many have, as that is idolatry punishable by death, exclusion from the Jewish people, and exclusion from the World to Come.

Readings in this area should be undertaken with extreme caution.  There is entirely too much literature out there under the name "Kabbalah" that has little or nothing to do with the true Jewish teachings on this subject.  Any book on the subject of practical Kabbalah should be disregarded immediately; no legitimate source would ever make such teachings available to a faceless mass audience.

Unless you are an expert in both the whole of the Hebrew Bible and the whole of the Law as summarized in the Rambam's Mishneh Torah (both in the original Hebrew, not in English translation), you should not even bother about learning Kabbalah.

If you are really serious about Kabbalah, once you have properly qualified yourself by learning Bible and the Law, you must get yourself a teacher that you can work with one-on-one, in person.  But be very careful about choosing a teacher, as some will teach you to worship idols in the name of our Holy Torah, as we have witnessed with our own eyes and heard with our own ears!  It is distasteful for us to mention this, but we would be irresponsible if we did not warn you.