Resolved What are your spiritual goals?

0
Votes
Undo
One of my first questions to most spiritual seekers is something like, "what do you seek to achieve on your spiritual path?" I pose the same question here to all members who I may not already know. Fine tuning our journey to evolution by bringing it to the forefront of our thinking can sometimes make us realize why we feel driven to explore our deeper reality through spiritual paths. I find for may, it comes down to finding a place of harmony and deeply rooted joy from where they can experience life from. Im always curious to hear about each individual's spiritual passions.
So whats your spiritual goal, your practice, your study, and your ultimate destination in this lifetime?
-Joseph
Tweet
Viña del Mar, Viña del Mar, Valparaíso Region, Chile
Visit
Comment
There are no comments made yet.
Responses (3)

Guest
Accepted Answer Pending Moderation
0
Votes
Undo
My ultimate goal is ascension, or illuminaton. From my experience in the few true astral projections, that is also an acceptable goal, until and unless I obtain the Ascension which many people are talking about. I am convinced that New Earth already exists in Eternity, and we can go now to escape this world of Illusion, the Matrix, if you will.It is a matter of raising your vibrations to the level of the fifth dimension, having New Earth as an intention, and holding that vibration, once you get there. I love Suzanne Lie's books that follow a Pleiadian couple from their time in our future, when their planet is ascending. Because of some castrastrophy on Earth, in which they did not deliver aid that would have helped us, they have come back from their future to help us in our Ascension. I am now on the last book of the series, called The Journal, which is a story of a human woman who realizes that she and her husband are star beings, and he has to leave her to go back to his Star Ship, leaving her to raise their daughter. Her daughter Liza feels neglected and unloved, because her mother is always focusing on how to release herself from her human body, and does not give her daughter the love she needs. Liza grows up, marries, and begins having problems with husband, and is at the point of leaving him, when she learns he has had an affair. In distress, she leaves him with their two children, and travels to visit her mother at the house that she grew up in, but finds that her mother is missing. While searching the house for any clues, she comes across her mother's journal, and begins reading it. After a few days, she begins to see that her mother believes she is a star seed, and that she longs to join her husband on the Ship, and that she has many issues because she realizes that she has been a failure at being a human being and a mother. Then her husband comes looking for her, and together, they began reading the Journal, and as they read it, they heal their own relationship, and eventually their whole family. All the books in this series are so illuminating about how we humans can begin healing our wounds, and contains many insights into the Ascension process. I highly recommend this series. The name of the first book is A New Home,
St Augustine, FL, USA
Visit
Comment
There are no comments made yet. 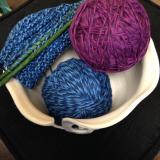 Belle
Accepted Answer Pending Moderation
0
Votes
Undo
Hmm. That's a good question. It's funny that I don't think about my spiritual path as clearly as that sometimes. So it's good to reflect on.

I think my purpose with my spiritual path it to gain my sense of mature personal power so that I can always make my own clear, good decisions about my life path.

When I was growing up, I felt trapped in a so-so or pretty depressing situation. Not the worst situation ever, but pretty disheartening in a lot of ways. So my spiritual path started out by wanting to be clear headed enough and with enough spiritual wisdom that I would never incarnate in a semi-bad or bad situation again. I don't want anyone else making my life path decisions for me. I want my full sense of personal power over my own life.

It seems like a spiritual path of personal development helps us gradually see more and more clearly. In this way we can trust ourselves. I want to guide my own life path in every sense. I'm open to positive inspiration and positive bits of wisdom. But I want to direct my own life path, especially as I decide where to go in a more imaginative or cosmic sense eventually.
Comment
There are no comments made yet.

There are no replies made for this post yet.
However, you are not allowed to reply to this post.
Please login to post a reply
You will need to be logged in to be able to post a reply. Login using the form on the right or register an account if you are new here. Register Here »
Forgot Password?