LIFE, is BUT a DREAM

illuminating the self through astral projection mastery

(Grand Prior of the International Order of Gnostic Templars) 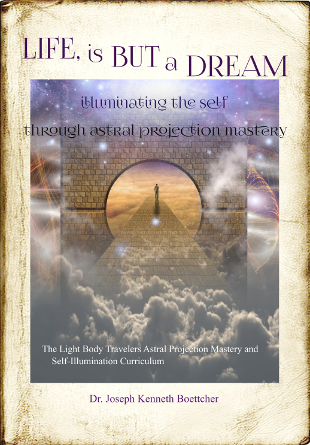 Life is But a Dream is the Light Body Travelers complete Astral Projection Mastery and Self Illumination Curriculum. The contents of this book have been meticulously composed over the course of three years by both the authors, as well as Light Body Travelers around the world.

It is our mission to share this book in the form of an unpublished manuscript, so that it is received by many thousands of readers in its true, untainted, essence. Direct communications and inspirations from within the astral realms have made this book the evolutionary treasure that it is today. Our work in Life is But a Dream has catapulted the spiritual evolution of individuals just like you all around the world.

Life is But a Dream delivers a user-friendly, comprehensive curriculum that gives you not only an infallible method of achieving highly lucid astral projection, but also a beginning study into the three metaphysical systems of Yoga, Kabbalah, and Hermetics. This book is highly esteemed in that it is packed full of life-altering information and spiritual practices that literally allow you to cross the threshold into self-illumination and conscious immortality. This is not a figure of speech, here, are given the steps to exist beyond the third dimension and experience an entirely new and illuminated perspective of this life, and your souls own journey.

Life is But a Dream is specifically designed to replace blind faith and underlying conditioned belief structures with your own personal experiences of reality. This is truly accomplished when your personal experiences within the astral and spiritual realms begin to unlock your greater existence. In the words of Sri Yukteswar, “Wisdom is not assimilated with the eyes, but with the atoms. When your conviction of a truth is not merely in your brain but in your being, you may diffidently vouch for its meaning.”

Complete access to this book and much more is available to you through our Light Body Travelers Advanced and Unlimited Memberships. Our unlimited membership program includes private instructions at your request from the authors of this work. This means that you are able to develop your astral projection abilities while receiving direct   guidance from actual astral travelers as you go about your journey of learning. There are few astral projection books, if any, that deliver the amount of information covered in our curriculum, and none that provide authentic and private guidance from its authors.

We have placed the entire contents section here, that you might review the amount of information amalgamated into this one literary treasure.

An Introduction For The Initiate, To Prepare

Developing a Schedule to Commit to the Meditations and Practices

Developing a New Program Within Your Physical Brain

The Psychology of Repetition

PART ONE: THE KNOWLEDGE. FOR THE INTELLECT AND DESIRE

Chapter I: A Broader View, to Awaken Desire

The Great Arcanum and its Universal Mysteries

The Human Need to Recapture Divinity

Ones Unique Experience With Astral Projection

A Brief Examination Into Humanities Historical Awareness of
Astral Projection

The Taoists Documentations in the Out of Body State

The Egyptian Book of the Dead, The Amentet and Tuat

The Tibetan Book of the Dead and the Bardo

Greek Philosophers, the Double Body and the Nous

Documentation From the Occult

From Within the New Testament, Out of Body States

The Need For Religions and Governments, How to Properly Evolve
Beyond Them

The Frequency of Tone

A Look Into Measurement of Frequency Through Science

Non-Localized Reality, To Begin The Shift

Understanding the Function of the Brain

Capacity of Memory Recall Stored Within a Greater Matrix

The Astral Light Pertaining to the Collective Unconsciousness

From The Bio Energetic Body to the Astral Body

The Nadis, Energy Points Along the Grids and Meridians of the Energy Body

Overview of the Chakra System and the Shushumna Nadi

A Word On Real-time Experiences And Astral Travel

Binaural Beats, Brain Waves, The Cerebrum And The Cerebellum

Brainwave States as Measured in Hertz

Locations of the Conscious and Unconscious Regions of the Human Brain

Building the Bridge of Emotional Links Between Dreaming and Waking
States

PART TWO: THE PRACTICE. FOR THE WILL, IMAGINATION
AND MEMORY

A Guide to Preparing for, and Following the Program

Week Three Outlined. Energy Work, Entering The Microcosm
To Know Thy Self

Week One Practices and the Hermetic Law of Mentalism

Learning the Art of Complete and Total Relaxation

Daily Correlation Exercises of Week One

Chapter IV: To Cultivate the Will and Imagination

Week Two Practices and the Hermetic Law of Correspondence

The Sacred Aspects of the Breath

Chapter V: To Know Thyself and Master its Facets

Week Three Practices and the Hermetic Law of Vibration

Understanding the Mechanics of Energy Work

Developing this Energy Work Practice of the Spiraling Vortex

Week Three Meditation Guide, Energy-work, to Know and Master the Self

Creating the First Spiraling Vortex in the Left Leg, Which Corresponds
To Your Desire/Emotion

Creating the Second Spiraling Vortex in the Right Leg, Which Corresponds
To Your Reason/Intellect

Creating the Third Spiraling Vortex in Your Left Arm, Which Corresponds
To Your Memory

Creating the Fourth Spiraling Vortex in Your Right Arm, Which Corresponds
To Your Will

Creating the Fifth Spiraling Vortex in the Spine, Which Corresponds
To Your Imagination

Philosophy And Psychology of the Kabbalah as Related to Energy Work

The Ruach, the Ein Sof, and the Creation of the Self, Through Kabbalistic
Philosophy

Week Four Practices and the Hermetic Law of Polarity

Examining the Mechanics of the Chakra System

Bridging the Ren and Du Channels Through the Tongue

Chapter VII: To Awaken The Elements Within

Week Five Practices and the Hermetic Law of Rhythm

Hindu Significance and Teachings of the Tattvas

A Word on Self-Inducing Trance, and Brainwave Functions

Merging With the Elements Through Tattva Meditation

Chapter VIII: Shifting Beyond the Body, To Know Freedom

Week Six Practices and the Hermetic Law of Cause and Effect

Examining the Practice of Awareness Shifting

Shifting Forward and Backwards With the Breath

Shifting Left to Right With the Breath

Shifting Above and Below With the Breath

The Taoist Tradition and Microcosmic Orbits

Chapter IX: Beyond The Body, To Know Immortality

Week Seven Practices and the Hermetic Law of Gender

Developing Astral Sensory From Within the Astral Body

Transference of Breath Into the Astral Body

Tattva Applications Within the Astral

Connection and Interaction With the Higher Self

Understanding and Accepting Each Astral Environment

Symbols in Dealing With Negative Entities

Scribing The Flaming Pentagram and The Crucifix

Becoming the Totality of Creation

Chapter XII: Extended Practices to Illuminate the Self

Rising on the Planes

Hermetic Applications Within the Astral and Physical Experience

Becoming the Elements in a Perfect Co-existence
With all Creation

Understanding your Relationships Within the Physical

The State of Illuminated Awareness

The True Path of Ascension Through Love and Service

Ritual Work, The Purification Of Your Environment Prior
To Astral Projection

The Lesser Banishing Ritual of the Pentagram