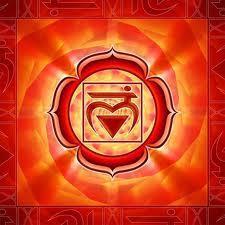 Muladhara-”base/basic”/Root Chakra.Muladhara, the base energy center, has a vortex which flowers in the perineum, the flat area between the genitals and anus. It is part of a larger energy structure that occupies the entire pelvic area. This perineum vortex grounds the pure energetic aspect to the Earth. It is this grounding aspect that provides connection with the human physical experience. Stimulating any part of this pelvic area through consciously directed energy work will increase the activity of the base Chakra and the energy body as a whole, increasing one’s security within and connection to the physical environment. This base, or root, can be considered as the resting place of the coiled Kundalini serpent, ready to be activated and eventually guided upward catalyzing ascension. These base and lower centers should be accurately simulated and opened before stimulating higher centers, or one can risk misbalancing the system through overstimulation of the higher chakras. Of all the Chakras, the base Chakra is the most connected to the physical world and is the gateway to the lowest of the material dimensions[1].

[1] [1]Within many metaphysical and spiritual traditions, there are two vibrational planes below the physical reality of the third dimension.