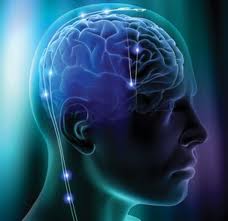 Simply from everyday experiences, most people become aware that the human brain is capable of entering a variety of states. What is less well known is that these states are marked by physiological changes in the specific frequencies at which the electrical waves produced by the vibration. When the brain is in a waking state, these brain waves oscillate (on average) between 12Hz and 30Hz. This is known as the Beta State of consciousness. Within the sleeping state, in deep meditation or in an astral projection, the brain waves oscillate between 4Hz to 7Hz. This is known as the ‘Theta State of consciousness.’

Now, as it happens, certain brain states are connected with successful astral projection, and these brain states do have, of course, specific ranges of frequency that they correspond to. One might assume, thus, that an awareness of the correspondence between brain wave frequency and state would be most useful as a method for calibration, however, due to certain anomalies of the brain, there is a far more interesting possibility, which arises—a concept known as binaural beats.

To understand the principle of binaural beats, one must understand that the human brain and hearing apparatus have developed to work in certain ways. Most importantly, our hearing is developed to allow tracking of objects within a three dimensional physical environment. As such, the brain assumes that both ears are hearing the same sound, but from different locations. As such, the brain attempts to compensate for differences in the auditory information itself. For example, a sound from the right will reach the left ear slightly after the right has registered the noise, allowing the brain to deduce the direction from which the sound originates.

Now, when the ears are presented with different sounds, this creates an interesting result. If two tones that are close to each other, but still different, are played, one in the left ear and the other in the right, the brain will assume that both tones are actually the same, and that the difference in tones is an illusion of perspective. In order to compensate, the brain responds by producing a “difference tone.”  The difference tone is equivalent to the difference between the two actual tones and is produced as a brain wave inside the brain itself. In other words, by playing specific frequencies to each ear, we can stimulate the brain to produce brain waves at specific frequencies, provoking a shift in brain state.

To offer a specific example: by playing the auditory frequency of 300 Hz in the right ear, and the frequency of 307 Hz in the left ear, the brain will compensate for the difference between the two and produce a third tone that will be exactly 7 Hz. This will result in the brain frequency being lowered and tuned to the 7Hz range, which just so happens to be the operating stage for entering the non-physical realms, and will do so with the conscious mind awake. This experience reconditions the brain, as it normally requires a sleep state to generate the slower brainwave patterns. By entering the state through the application of binaural beats, the brain learns that it is possible for these states to be achieved with conscious awareness. The binaural experience also allows the conscious mind to gain familiarity with these brain states, and with the frequency ranges experienced during astral projection. Binaural technology has provided a fabulous tool for those seeking astral experience, as it allows the initiate to know precisely what brain state they are entering. This precision allows for much more effective methods to be used in teaching the skills related to entering non-physical reality, and has thus increased the success of training programs, allowing many more humans to learn the art of consciously inducing out of body experiences.

Although binaural beats can be an extremely useful tool for learning the skills of astral travel, it should be remembered that the adepts and masters of the past achieved all the results associated with this technology, and more besides, through means of greater mental control. By their practices, spiritual seekers developed a capacity for placing the brain and its oscillation patterns into theta states of 4HZ to 7HZ, and even lower ranges, to achieve what we call the delta brainwave states of 1HZ to 3HZ. Unlike with binaural beats that take time to resonate within the brain creating the attunement, the trained practitioner could produce these states at will and could achieve the result so rapidly as to be almost immediate.

The use of binaural beats is by no means discouraged, as their application can be of great assistance, especially when first attempting to enter an unfamiliar state of consciousness with recognition. However, the use of binaural beats is by no means a necessity, as the process which follows here has been cultivated from ancient mystical practices which, essentially, imbue the practitioner with a complete understanding of the physical brain and its conscious/subconscious regions, as well as illuminating the role that various regions and states of the brain play in creating the self and its experience. This understanding is then applied to the developed psyche, training it to control and eventually master these conscious and subconscious regions. With this achieved, the phenomena of astral projection (and many other mystical processes) may be attained. While these results may sound implausible, it has been this author's experience that this degree of control over the physical brain is well within reach of those who seek to achieve it.

Of course, in order to achieve these results, one must learn a bit more about how the brain and its various wave patterns/states function. To aid in this, let us turn to the chart below, which outlines the standard brainwave activity from the peak performance Gamma state to the unconscious Delta state, as measured in Hertz. 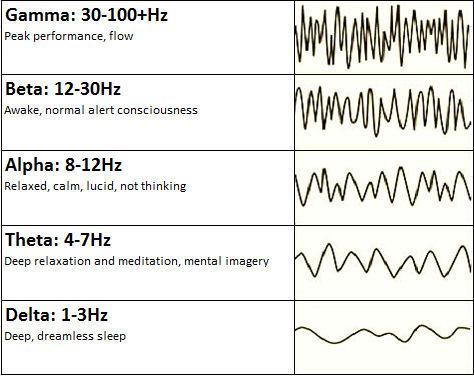 (A visual aid to demonstrate the frequency patterns of brainwaves within their five basic phases.)

Just from a cursory look at this chart, we can learn something of the brain’s states. It would seem obvious, for example, to point out that increases in the brain wave’s frequency is correspondent to increases in alertness. As we continue our explorations into the various activities and states of the brain, it also becomes important at this point to look at the actual physical structures of the brain. It is, at least in part, by increasing our understanding of the brainwave activity already discussed as it relates to the physiology of the brain that we can begin to gain clarity about and control over the physical brain’s processes.

To begin our study of the brain’s physical regions, we should begin by recognizing that the brain, as an organ, has evolved to the current form found within humans over a protracted period of time. The brains of reptiles and other vertebrates share certain characteristics, particularly those related to the basal ganglia, suggesting a shared evolution of those structures. As well, a large region of the human brain is devoted to the limbic system, an arrangement that is shared with other mammals, and thus is, once more, recognized as having developed within other species before humankind emerged. A third region of the brain, which is found only in mammalian species that evolved more recently, though most developed in the human brain, does exist. This is the Cerebral Neo-cortex, the region that, it is believed, houses the conscious faculty of mind itself, as well as the thinking and reasoning areas located in the extreme front area of the brain. This system lies in the cerebral cortex and outer coating of the brain. The lateral strip, which runs across the top of the head at the front of the cerebral cortex’s perennial lobe, receives information from the senses. This sensory stimulus is then filtered and processed to create what we perceive as our physical environment.

The main processes associated with the subconscious mind occur in the area located within the hypothalamus: a portion of the cerebellum and temporal lobe of the cerebral cortex. The areas of the brain that control and regulate our body's involuntary muscles (such as those of the heart, lungs, glands, and digestive system) are regulated by activity in this region, and thus fall within the purview of the subconscious. The cerebellum's activity also includes subconscious processes for both the positive and negative aspects of the self. Exploring the subconscious from a conscious state of mind is the initial process taken by all adepts and is one continued by a master, for it is the power hidden within these dark caverns of the psyche that steer our actions. Although we believe ourselves to be awake each day, we all enter autopilot at times, behaving like an unconscious being. Many neurologists claim that, indeed, all decisions actually occur outside awareness, within these subconscious currents. This must be comprehended and then applied, and within the weeks to come, the initiate will go through a number of exercises and techniques to achieve this ultimate exploration and mastery of the self. The following diagram gives a basic visual understanding of these regions of the cerebrum and the cerebellum, which can be generally recognized as the conscious and sub conscious regions of the brain. 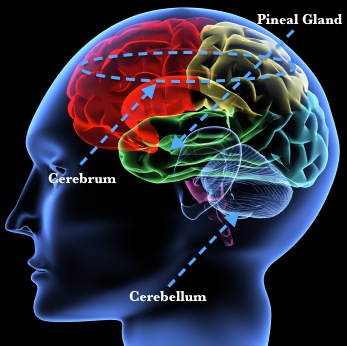 (A visual diagram illustrating the location of the Cerebrum, cerebral cortex and outer coating of the brain, the Cerebellum, and the Pineal Gland)

We have included this intense three hour binaural beat meditation here for your convenience and spiritual growth. This session works while sleeping as well, should you not have time to meditate for four hours daily.