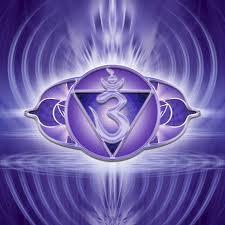 Ajna-”order” or “command”/Brow Chakra. Often called “the Third eye” the Ajna Chakra is the center for spiritual and multidimensional vision. When one opens this channel and learns to utilize it, one discovers that it actually works very much like the physical eye, but instead of reacting to light energy, it sees into other energetic realms. Thus, when awakened and activated, it serves as the center for psychic abilities like channeling and telepathy, as well as providing access to higher intuition, non-physical vision and clear thinking. This non-physical vision is of particular importance to our current undertaking, as it is the key sense utilized for site when in non-physical form, and is often described by experienced individuals as “astral vision”. It should be noted, however, that this form of sight is more than just a means of interpreting the world when in the subtle body. The practitioner has the ability to look inside the subconscious, to explore past lives, and even to see and clear past conditioning. The third eye is closely tied with the Crown Chakra and when both are activated, higher wisdom not only flows into the mind, but also can properly be interpreted within third dimensional reality. The third eye is also the key to remote viewing, as it allows one to see anything anywhere. Even more impressive, the third eye does not merely reveal the physical form, but sees the true nature of that which is observed. In essence, the third eye is the higher self’s sensory organ, and as such, opening it provides access to information from higher vibratory realms. As it is brought into balance, these insights and information will flow through the entirety of the Chakra system, allowing each energy center access to its insight. However, it is important to recognize that, while the Ajna provides us with access to this information, it does not teach us how best to interpret and utilize that information. The energy is received through the third eye, but it is only when other resources of the self-interpret that energy into meaningful information that it results in true insight and intuition.