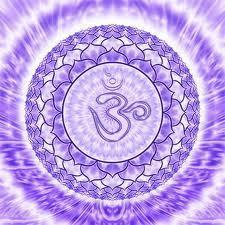 Sahasrara-“thousand-petaledlotus”/Crown Chakra. The Crown Chakra is located at the apex of the head just beneath the skull’s physical crown. This is the entry point that higher consciousness utilizes to enter the physical vessel. Typically this Chakra is blocked in humans, at least to some extent, as a completely opened crown would create a continuous connection with cosmic consciousness. While that level of awareness may sound desirable, it is not practical for existence within the physical reality of the body. Indeed, while it would give a human being the ability to contact all multidimensional consciousness, and to receive clear and constant communication from higher dimensions, it would also overwhelm our conscious minds with information completely irrelevant to the majority of our actual physical existence[1]. The Crown Chakra is also the proper exit point for the soul at the point of death. If the Crown is open enough, the soul may escape through the crown and begin ascending into higher dimensions. On the other hand if the crown is blocked, which is usually the case, the soul may exit at another point such as the mouth, eyes, ears, or anus. With an exit through lower orifices, the soul may end up in negative astral realms during the afterlife, spending its existence wandering until the astral body begins to shatter and the light body and spirit can be released to begin their ascension. As well as serving as a portal for the cosmic connection, the Crown is also the thought organ of the Chakra system. Just as the third eye can be called the sensory organ, the Crown serves as a brain, which can regulate and interpret the energetic impulses from these higher realms. When it is in balance, it serves to organize the information from those higher realms into a format that is useful on the third dimensional plane. With continuous activation and balancing of the Crown Chakra, one can expect an increase in understanding the self and its spiritual reality. It is important to recognize, however, that this understanding is not indicative of new knowledge or information. Instead, this increase in understanding is derived from the same information and energy that each of the lower Chakras intuitively understands and processes. The Crown, however, has the capacity to render that same energy into a conscious awareness. Just as the brain itself does not receive new information when it interprets what we see, hear and feel, so too, the Crown Chakra does not provide new information itself, but translates the energy from lower Chakras into a new form that can be understood by conscious awareness.

As all of the Chakras are brought into balance, one becomes capable of recognizing their interactions as a whole, seeing how these energy centers work to create a system that operates in parallel to that of the physical body. By now, the reader will already understand that the lower Chakras provide for connection with the physical world, interpreting the body’s desires and needs, while also allowing for the incarnated self to experience and reflect the unique energy of the individual soul. The energy of universal love, which pervades the higher vibratory realms, is brought into contact with this system by the Heart Chakra, which pumps that energy throughout the entire chakra system. In doing so, it provides a channel that feeds each of the individual Chakras, providing them with love energy they can absorb and interpret. The Throat center’s ability to communicate this energy and the third eye’s capacity for sensing it combine to allow the individual to experience and interact with higher vibratory realms, and the Crown Chakra allows the conscious self to interpret those experiences. As well, one must realize that the higher energy of the Crown, third eye and Throat centers are carried through to the lower Chakras, allowing these lower centers to attune with the potentials of higher realms, and keeping the self from becoming overly embroiled within the drama of physical existence. Remember that no one Chakra is more important or powerful than any other, as it is the balancing of the system that allows for ascension, not the individual efforts of any one energy center alone.

[1]To offer a comparison, neurologists have pointed out that a large percentage of the information we receive through our physical senses is ignored as irrelevant. They have shown that attempting to interpret all of the details would result in an overload of information, making it very difficult to effectively interact with the world. If one adds in the potential of information provided by the astral self, the overwhelm would seem to be even more comprehensive.