When approaching the subject of Kabbalist philosophy, it must be held in mind that this mystical system of study and practice serves not only to demonstrate the process of creation and manifestation, but also serves as an exact and systematic explanation of all that is. In fact, it even reveals and conceptualizes all that is not. One need not be Jewish, or fluent in Hebrew to study and utilize this ancient wisdom for spiritual ascension and realization, for it spans far beyond the limits of any race, creed, or manmade illusions of social separations.

The tree of life itself, composed of the ten Sepheroth, "not nine, but ten, not eleven, but ten[1]," functions as a visual map of individual spiritual realms, as well as the inner, or esoteric, fundamentals of the human microcosm. This map, or “ladder of Jacob” in the old testament, was initially shared only as an oral tradition, whereby which, the formation of a solidified structure through the imaginative faculty became most real within the psyche of the student, who might then properly ascend on this ladder, having formed with clarity each detail into the layers of the subconscious, having never once seen this tree physically displayed. It is not the author’s intention to teach the Kabbalistic philosophies in this section, however, it will be recommended to the reader here to seek and comprehend the ancient writings of the Sepher Yetzirah[2] as a profound introduction to the Kabbalah, should further interests be sought.

In dealing with astral projection and its relationship to the Kabbalahs' tree of life, know that the whole of the collective unconscious, which is the energetic architecture of the astral planes, gathers and resides in the sphere of Yesod. As mentioned previously, the Sepheroth of Yesod is not only the realm that Carl Jung uncovered as the collective unconscious, it is also the Anima Mundi, or soul of the world, to the Hermetic philosophers. Here, within this sphere of Yesod, vibrates all thoughts, memories, emotions and dreams of manifested beings. The Kabbalists recognize Yesod as the androgynous bi-product, or child of its two parental energies, the Sepheroth of, Netzach, (victory/male) and Hod,  (splendor/female.) This can be seen in the tree of life figure located below. 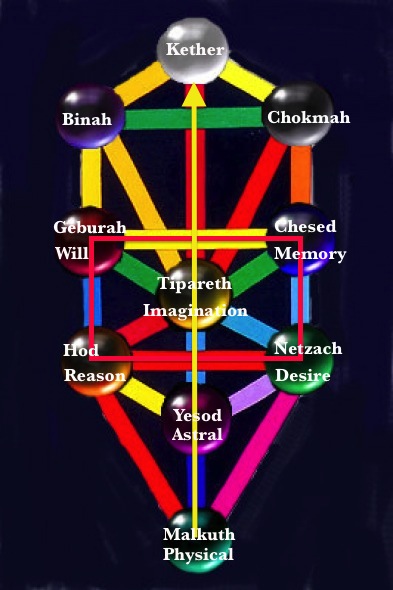 (A diagram of the Kabbalistic Tree of Life displaying the Ruach in its center section, and the central vertical path of ascension known as “Rising on the Planes”)

The center, or mid-section of the tree, containing the fourth, fifth, sixth, seventh and eighth Sepheroth of Chessed, Binah, Tipereth, Netzach and Hod together, compose the Ruach, or the aspect of awareness above that of the primal actions of the ninth and tenth Sepheroth. As a reference to the reader, this lowest level of awareness beyond the Ruach may be associated with the reptilian brain. The Ruach however, as it has been now understood and utilized within the continuous energy work of this process, encompasses the reasoning or rationalization of the self, the desire and all its emotional impulses, the will and all its powerful underlying currents, the memory allowing experience to unfold and expand one's abilities, and the imagination with its ability to transform any thought into eventual reality. By embracing the full potential of each of these five aspects that is the self, no task can be impossible, all knowledge shall be attainable, and all thoughts shall be manifested.

There exists also a method known as "rising on the planes,” within the Hermetic Order of the Golden Dawn, which allows the astral traveler to ascend the middle, or androgynous pillar of the tree, from, Malkuth, the physical earthly kingdom, to Yesod the etheric lunar plane of the astral, to Tipereth the solar heart center of harmony, to Kether the infinite un-manifested. The arrow pointing upward in the previous diagram identifies this path of ascension.  As the reader would now assume correctly, the four androgynous, or non-polarized Sepheroth are the correspondences of the Chakras Muladhara, Svadisthana, Anahata and Sahasrara, (Base, Sacral, Heart and Crown respectively.) From within the astral realms of Yesod, you may now strive to ascend upward into the frequencies of Tipereth, reaching a place of solar awareness and unconditional love. Having achieved this, although it is no small accomplishment, you may also strive to ascend once more into the timeless, unborn/unmanifested, realm of Kether. Here, there exists the totality of all and nothing simultaneously. For this cannot be described with words, nor can it be conceptualized by the rational waking mind, it may only be conceptualized as the greatest of mysteries containing un-utterable wisdom. The author extends sincere applause to all who may experience this unspeakable nothingness. Use this system of understanding well and wisely as the exploration and growth within all planes unfolds before you in each new experience.

[1] A quote found in the introductory sections of the Sepher Yetzirah to illustrate the perfection and balance in the number ten regarding its function in the creation process.

[2]The Sepher Yetzirah, meaning “Book of Formation” in Hebrew, is recognized as the earliest extant text in Jewish esotericism. This text reveals the act of creation through number, writing and speech while providing explanations to the process of the manifestation of energies.