fromRaja Yoga: The Science of Self-Realization

By exploring this level of information, you are touching the tip of a tremendous iceberg. The process of illumination is not something reserved for select adept human beings. Rather, it is a privilege set aside for any true seeker. Join us and experience the miracle of this existence, and discover your eternal, multidimensional reality. (This is not a cliché new age figure of speech) You are standing at the threshold of a life-changing doorway. See what the L*B*T is all about and click here:  http://www.lightbodytravelers.com/sign-up.html 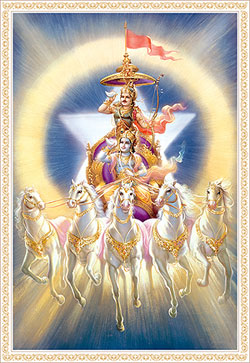 Patanjali, the great ancient exponent of Raja Yoga, wrote that the path to enlightenment embraces eight stages. (His teaching is also known as Ashtanga, or “Eight-limbed,” Yoga.) An explanation of these eight “limbs” will help to give an understanding of the deeper purposes and directions of yoga.

The first two stages of Patanjali’s eightfold path are known as Yama and Niyama. Yama means control; Niyama, non-control. Literally, these two stages mean the don'ts and the do’s on the spiritual path. They are, one might say, the Ten Commandments of yoga.

Their essential purpose is to permit the milk of inner peace to be gathered in the pail of the mind by plugging holes that have been caused by restlessness, wrong attachments, desires, and various forms of inharmonious living.

The rules of Yama (the Don’ts) are five:

It is interesting to note that all of these virtues are listed in negative terms. The implication is that when we remove our delusions, we cannot but be benevolent, truthful, respectful of others’ property, etc., because it is our nature to be good. We act otherwise not because it is natural for us to do so, but because we have embraced an unnatural state of egoistical in harmony.

The rules of Niyama (the Do’s) are:

The third stage on the eightfold path is known as Asana, which means, simply, posture. Some writers have tried to make the point that Patanjali refers here to the need for practicing the yoga postures as a preparation for meditation. But Patanjali was talking, not of practices, but of the different stages of spiritual development. Here, then, posture means no particular set of postures, but only the ability to hold the body still as a prerequisite for deep meditation. Any comfortable posture will do, as long as the spine is kept erect and the body relaxed. A sign of perfection in Asana is said to be the ability to sit still, without moving a muscle, for three hours. Many people meditate for years without achieving any notable results, simply because they have never trained their bodies to sit still. Until the body can be mastered, higher perceptions, so subtle that they blossom only in perfect quiet, can never be achieved.

The fourth stage of Patanjali’s path is Pranayama … Prana does mean breath, but only because of the close connection that exists between the breath and the causative flow of energy in the body. The word, prana, refers primarily to the energy itself. Pranayama, then, means energy control. This energy control is often effected with the aid of breathing exercises. Hence, breathing exercises have also come to be known as pranayamas.

Patanjali's reference is to the energy control that is achieved as a result of various techniques, and not to the techniques themselves. His word signifies a state in which the energy in the body is harmonized to the point where its flow is reversed—no longer outward toward the senses, but inward toward the Divine Self that lies in the hearts of all beings. Only when all the energy in the body can be directed toward this Self can one’s awareness be intense enough to penetrate the veils of delusion and enter super-consciousness.

The very energy with which we think is the same energy that we use to digest our food. To test this claim, consider how difficult it is, after a heavy meal, to think about weighty problems, and how clear the mind becomes after a fast. To divert all the energy from the body to the brain cannot but intensify one's awareness, and the keenness of one’s understanding. To direct this energy inwardly is the first step in divine contemplation.

Pratyahara—the interiorization of the mind

The fifth stage on Patanjali’s journey is known as Pratyahara, the interiorization of the mind. Once the energy has been redirected towards its source in the brain, one must then interiorize one’s consciousness, so that his thoughts, too, will not wander in endless bypaths of restlessness and delusion, but will be focused one-pointedly on the deeper mysteries of the indwelling soul. A thread must be gathered to one point before it can be put through the eye of a needle. Similarly with the mind: It is necessary to concentrate one’s thoughts as well as one’s energies, if he would hope to penetrate the narrow tunnel that leads to divine awakening.

Patanjali’s sixth stage is known as Dharana, contemplation, or fixed inner awareness. One may have been aware of inner spiritual realities—the inner light, for instance, or the inner sound, or deep mystical feelings—before reaching this stage, but it is only after reaching it that one can give himself completely to deep concentration on those realities.

The seventh stage is known as Dhyana, meditation, absorption. By prolonged concentration on any stage of consciousness, one begins to assume to himself its qualities. By meditating on sense pleasures, the Inner Self comes to identify its happiness with the gratification of those pleasures; the individual loses sight of the indwelling Self as the real source of his pleasures. (If anything material were really a cause of happiness, it would cause happiness to all men. The fact that it does not proves that it is our reactions to those things, rather than the things themselves, that give us our enjoyment.) Again, by concentration on our personal faults, we only give strength to those faults. (It is a serious mistake continually to call oneself a sinner, as many orthodox religionists would have one do. One should concentrate on virtue if he would become virtuous.) By concentrating on the inner light, then, or upon any other divine reality that one actually perceives when the mind is calm, one gradually takes on the qualities of that inner reality. The mind loses its ego identification, and begins to merge in the great ocean of consciousness of which it is a part.

The eighth step on Patanjali's eightfold journey is known as Samadhi, oneness. Samadhi comes after one learns to dissolve his ego consciousness in the calm inner light. Once the grip of ego has really been broken, and one discovers that he is that light, there is nothing to prevent him from expanding his consciousness to infinity. The devotee in deep Samadhi realizes the truth of Christ's words, “I and my Father are one.” The little wave of light, losing its delusion of separate existence from the ocean of light, becomes itself the vast ocean.