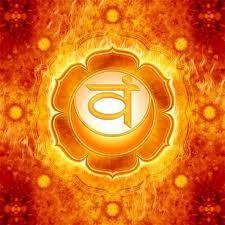 Svadisthana- “one’s own self”/Sacrum, Sacral Chakra. The Sacral (or Sex) Chakra is located about two inches below the navel. It is referred to as the sex center because it indeed deals with one's sexuality. However, it might be more accurate to say that it is connected to one’s sexual identity and values, in that the role of this energy center is responsible for concepts of self-worth, influencing how one interacts with others on a social level, and does not merely relate to procreation or sexual relationships and persona. In addition to this role, it is also the center for one’s creativity, which can be thought of as a spiritual extension of the body’s procreative impulses. While this relationship to creativity is important, it is valuable to recognize that the Svadisthana deals with a limited aspect of creativity. In this area, it shares a connection with the throat Chakra, which is linked creative impulses and power related to a higher aspect of self. The sacral center deals with more grounded creative impulses, particularly those related to the physical body’s needs and desires. As one stimulates the sacral Chakra, one may notice an increase in these sexual and creative powers, but if done with care to maintain a balance with the Base Chakra, these aspects will remain in balance as well. Additionally, once the Base Chakra has been awakened and stimulated, allowing the energy to flow upwards to stimulate the Sacral Chakra will create a sense of connection, grounding the subtle bodies to allow for conscious incarnation into higher realms. This balance must, of course, be continued as the energy is allowed to continue its progress up through the restof the major energy centers.