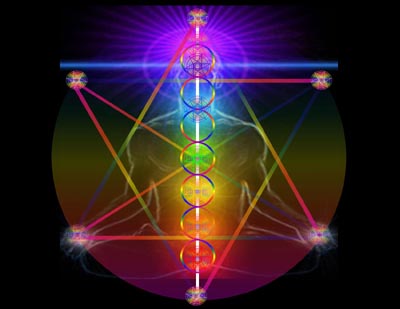 Let us begin with the sacred movements of yoga. With its undeniable worldwide appeal, now extending into cultures far beyond the continent of India, Yoga is often perceived initially as a physical or mental challenge to the student who seeks physical and mental balance in life. These physical and mental aspects are no doubt vital and serve as one of, if not the most effective methods of biological and psychological exercises known to humanity. These two benefits must be fully understood and embraced, but not allowed to become the distraction, or primary focus of the ego as it attempts to push and conquer its perceived limitations in physical abilities through the Asanas. It is by no means the agenda of this text to diminish the empowering physical and mental benefits of Yoga, however, as this work seeks to share the realities of the greater spiritual aspects of self, an esoteric or internal examination must be now fully unveiled.For there is a third and greater purpose in the devotional practice of Yoga that is often overlooked by many, yet it transpires with or without the knowledge of the Yogi. It is the very process of spiritual alchemy by means of stimulating and awakening the latent Kundalini energies residing within the Lotus of the Root Chakra.

The Gnostics hold the understanding that through the compression and expansion of the physical body, the alchemical fire is stoked, which then moves throughout the subtle body, eventually residing at the base of the spine to awaken the coiled serpent of the Kundalini. All who seek to embrace the mystical aspects of this sacred practice of Yoga apprehend this deeper level of awakening and experience. Yoga is in fact an ancient method of spiritual unity that pre dates even civilizations considered to be ancient. Should one venture to trace Yoga to its roots and origin, they will encounter much validity in the civilizations of Atlantis, Lemuria and possibly more. To this day, there are advanced spiritual traditions around the globe, which refer to the presence of ascended masters, once among humanity, to accomplish the enlightenment of mortal minds. Should one search further into humanity’s beginnings, a discovery of the great Kundalini masters who were not of this earth, and their distribution of Gnostic and alchemical wisdom in the form of Yogic practices shall be revealed. These ascended Kundalini masters have been personified and named by cultures around the world and recognized as the first teachers of spiritual wisdom.

Skanda Murugan, in Hinduism and Buddhist traditions is associated with snakes and the rising force of the Kundalini energy, which brings enlightenment to the seeker. Skanda Murugan is also referred to as Sanat Kumara or Al Khidir, meaning, “green man” in the Sufi Muslim tradition. Qutzequetal to the Myan was the serpent God of destruction (Kundalini activation) allowing ascension of spiritual awareness and ability. The wisdom held in Gnostic traditions, which is shared by virtually every Goddess tradition in their philosophical understanding, is that the message of the serpent in the Garden of Eden was this very method of enlightenment through Kundalini ascension (to grasp divinity, and no doubt attain Godlike awareness.) Many mystical teachings associate the serpent slithering down the tree with the dissention of spiritual energy down the tree of life, or spine, which, as displayed previously, is the process of manifestation into a physical form of being. Ascension then, can only occur when this same energy (serpent,), which has taken its place at the base of the tree, (Root Chakra) is awakened and then rises upward, re-claiming, or uniting, with its divine aspect. Although not entirely understood by all who have adopted the practice of Yoga, this is the mystical reality, which is attained unequivocally, within the energetic body of the Yogi. Yoga, at the energetic or mystical level is then purely spiritual alchemy, directly stimulating the latent Kundalini energies.

Although some readers of this book may be well versed in the mystical workings of the Kundalini energy, it cannot be assumed that all are. Therefore, here, an extended excerpt from the International Order of Gnostic Templars’ concealed library shall be referenced to bring direct understanding and insight to the inner alchemical process that begins upon the awakening of the Kundalini energy.

“Gnostic Alchemy is the process of transforming a human being into a divine being, a god or a goddess. This alchemy can occur with or without the aid of a physical substance, an elixir or pill. Most commonly, it occurs through observing yogic practices that awaken the inner, alchemical force at the base of the spine, the Kundalini, which is the same power that a physical pill or elixir is designed to awaken. When this evolutionary force is awakened it accomplishes all the processes needed to transform a human being into a perfected human being, with all of his and her innate spiritual wisdom and abilities fully developed and intact.

Having fully digested this excerpt from the Gnostic library of the Knights Templar, the profound and very real potentials may be grasped in this process of spiritual growth. This is the same energy now being utilized each time you separate from your physical body, and serves as the spiritual force needed to accomplish this astral projection experience regularly. One could hardly do better than to adopt a regular Yoga practice to coincide with the astral projection process learned within this book. The caliber of perfection that Yoga brings to the mental, physical and spiritual aspects of the self are superior on all levels, and shall remain untouched by other means of physical exercise. There now exist a variety of Yoga practices, which literally cater to any age group in any circumstance. While each Yogic practice is suitable in its own right, it is the authors’ recommendation to further study Patanjalis' Ashtanga eight-fold path and philosophy.