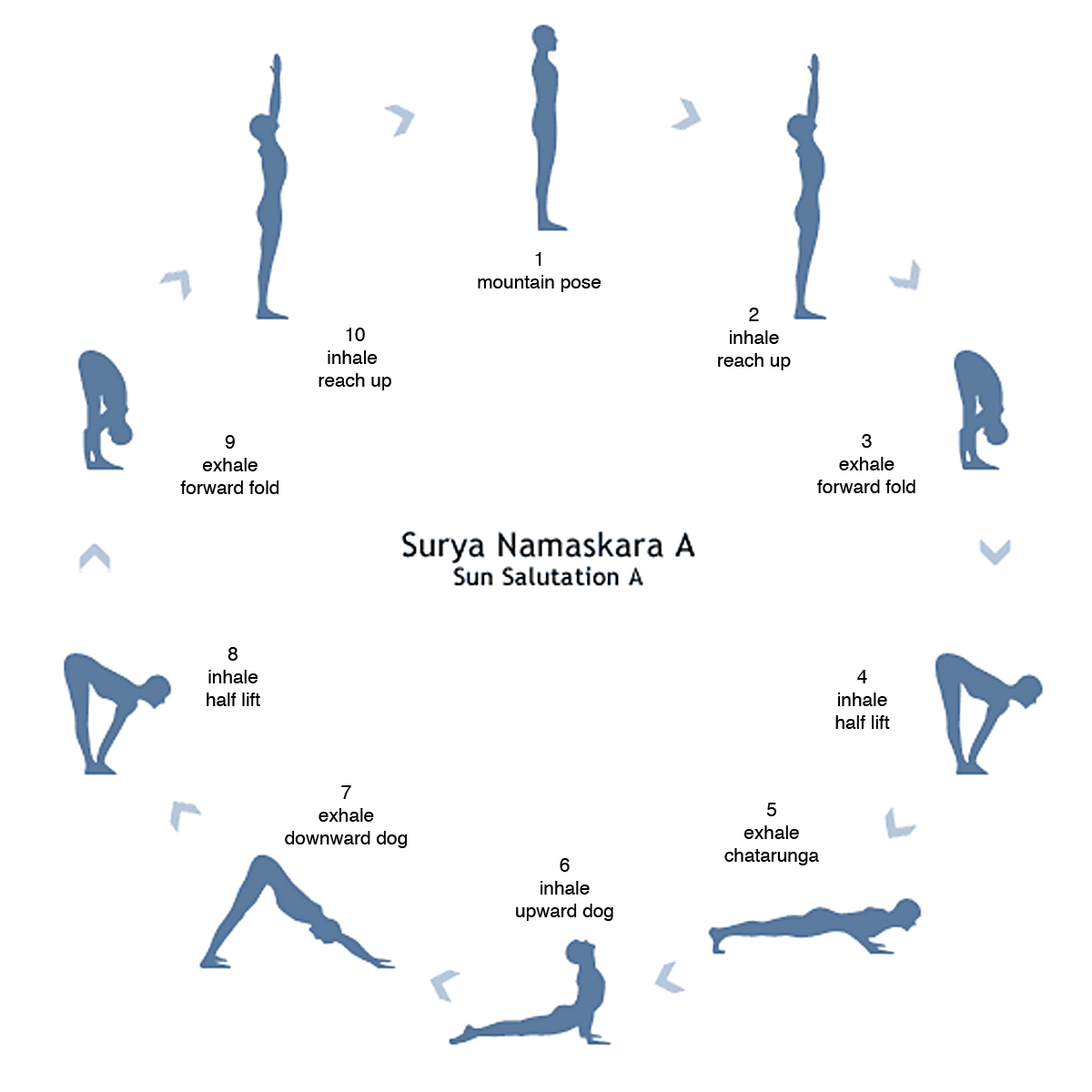 In all of the yoga asanas (postures) there is a basic philosophy. The underlying phenomena which produces the real results of yoga is that of the breath, specifically Pranayama breathing. As described, the inner fire, or Kundalini, must be generated throughout the physical and spiritual bodies as they move through the poses. That being said, regarding yogic stretches, no matter how you decide to stimulate the body through movement, be sure of your breath connection. The general principle of movement with the breath in yoga is that as you ascend, or move a body part upward, you are inhaling. As you descend, or move a body part downward, you are exhaling. You may choose to utilize the “root lock” (Mula-Bandha) technique described in week four’s chakra meditation. This will naturally allow these generated Kundalini energies to ascend upward as you proceed through your stretches and movements.

The first yoga stretch will be the fundamental combination of movements known as the Surya Namaskara A, Sun salutation.

·                    From a standing position, (mountain pose) feet and legs together, spine straight, shoulders tucked slightly back to bring the chest forward and your hands at your side, enter your Pranayama breathing. Feel as if your crown is being slightly lifted upward as you breath with purpose.

·                    With a controlled inhalation, raise your arms outward and up to join your palms above your head. Your arms are now straight up with your biceps against your ears. (Keep your shoulders and neck relaxed)

·                    With a controlled exhalation, release your arms outward and down as you fold at the waist, diving into a forward fold. Your palms should reach the floor technically, however if they do not, simply bend forward as your neck and shoulders remain relaxed.

·                    On an exhalation, bend your knees touching both palms to the ground as you then step your right leg back, followed by your left leg. You will now be in “plank position” which looks similar to that of a push up position. Keep your back flat as you bend your arms moving your body to the floor into “Chatarunga.”

·                    With a controlled exhalation, roll back onto the balls of your feet, folding at the waist, raising your buttocks as your head and chest move downward. In this downward-dog pose, you are in the form of an inverted “V.” (Remain here for a total of five breaths with your neck and shoulders relaxed. Focus your gaze towards your belly button or thighs.)

·                    With a controlled inhalation, raise your arms outward and up as you unfold at the waits to stand erect once more. Your palms meet once more high above your head with straight arms. Your biceps are once more touching your ears. Relax your shoulders and neck.

This ancient yet common series of movements just described serves as a remarkable method of beginning any day on earth whether preparing for meditations and spiritual work or not. With the perfected technique of movement combined with breath, the body is energized and balanced in a sacred act of sun salutation. The Sun Salutation series is given here within the appendix as a standard morning ritual of the Yogi. However, should you have your preferred morning stretches or any other method of stimulating the recently rested body, you are certainly able to apply it.