Chapter VI Atmasanyamayog or "The Book of Religion by Self-Restraint" 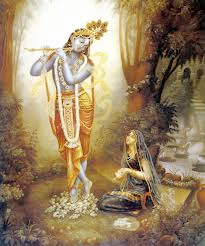 Therefore, who doeth work rightful to do, Not seeking gain from work, that man, O Prince! Is Sanyasi and Yogi - both in one! And he is neither who lights not the flame Of sacrifice, nor setteth hand to task.

Regard as true Renouncer him that makes Worship by work, for who renounceth not Works not as Yogin. So is that well said "By works the votary doth rise to saint, And saintship is the ceasing from all works;" Because the perfect Yogin acts - but acts Unmoved by passions and unbound by deeds, Setting result aside.

Let each man raise The Self by Soul, not trample down his Self, Since Soul that is Self's friend may grow Self's foe. Soul is Self's friend when Self doth rule o'er Self But self turns enemy if Soul's own self Hates Self as not itself.1

[Footnote 1: The Sanskit has this play on the double meaning of Atman.]

The sovereign soul Of him who lives self-governed and at peace Is centered in itself, taking alike Pleasure and pain; heat, cold; glory and shame. He is the Yogi, he is Yukta, glad With joy of light and truth; dwelling apart Upon a peak, with senses subjugate Whereto the clod, the rock, the glistering gold Show all as one. By this sign is he known Being of equal grace to comrades, friends, Chance-comers, strangers, lovers, enemies, Aliens and kinsmen; loving all alike, Evil or good.

Sequestered should he sit, Steadfastly meditating, solitary, His thoughts controlled, his passions laid away, Quit of belongings. In a fair, still spot Having his fixed abode, - not too much raised, Nor yet too low, - let him abide, his goods A cloth, a deerskin, and the Kusa-grass. There, setting hard his mind upon The One, Restraining heart and senses, silent, calm, Let him accomplish Yoga, and achieve Pureness of soul, holding immovable Body and neck and head, his gaze absorbed Upon his nose-end,2 rapt from all around, Tranquil in spirit, free of fear, intent Upon his Brahmacharya vow, devout, Musing on Me, lost in the thought of Me. That Yojin, so devoted, so controlled, Comes to the peace beyond, - My peace, the peace Of high Nirvana!

But for earthly needs Religion is not his who too much fasts Or too much feasts, nor his who sleeps away An idle mind; nor his who wears to waste His strength in vigils. Nay, Arjuna! call That the true piety which most removes Earth-aches and ills, where one is moderate In eating and in resting, and in sport; Measured in wish and act; sleeping betimes, Walking betimes for duty.

When the man, So living, centres on his soul the thought Straitly restrained - untouched internally By stress of sense - then is he Yukta. See! Steadfast a lamp burns sheltered from the wind; Such is the likeness of the Yogi's mind Shut from sense-storms and burning bright to Heaven. When mind broods placid, soothed with holy wont; When Self contemplates self, and in itself Hath comfort; when it knows the nameless joy Beyond all scope of sense, revealed to soul Only to soul! and, knowing, wavers not, True to the farther Truth; when, holding this, It deems no other treasure comparable, But, harbored there, cannot be stirred or shook By any gravest grief, call that state "peace," That happy severance Yoga, call that man The perfect Yogin!

Steadfastly the will Must toil thereto, till efforts end in ease, And thought has passed from thinking. Shaking off All longings bred by dreams of fame and gain, Shutting the doorways of the senses close With watchful ward; so, step by step, it comes To gift of peace assured and heart assuaged, When the mind dwells self-wrapped, and the soul broods Cumberless. But, as often as the heart Breaks - wild and wavering - from control, so oft Let him re-curb it, let him rein it back To the soul's governance! for perfect bliss Grows only in the bosom tranquillized, The spirit passionless, purged from offence, Vowed to the Infinite. He who thus vows His soul to the Supreme Soul quitting sin, Passes unhindered to the endless bliss Of unity with Brahma. He so vowed, So blended, sees the Life-Soul resident In all things living, and all living things In that Life-Soul contained. And whoso thus Discerneth Me in all, and all in Me, I never let him go; nor looseneth he Hold upon Me; but, dwell he where he may, Whate'er his life, in Me he dwells and lives Because he knows and worships Me, Who dwell In all which lives, and cleaves to Me in all. Arjuna! if a man sees everywhere Taught by his own similitude - one Life, One Essence in the Evil and the Good, Hold him a Yogi, yea! well-perfected!

Slayer of Madhu! yet again, this Yog, This Peace, derived from equanimity, Made known by thee - I see no fixity Therein, no rest, because the heart of men Is unfixed, Krishna! rash, tumultuous, Wilful and strong. It were all one, I think, To hold the wayward wind, as tame man's heart.

Hero long-armed! beyond denial, hard Man's heart is to restrain, and wavering; Yet may it grow restrained by habit, Prince! By wont of self-command. This Yog, I say, Cometh not lightly to th' ungoverned ones; But he who will be master of himself Shall win it, if he stoutly strive thereto.

And what road goeth he who, having faith, Fails, Krishna! in the striving; falling back From holiness, missing the perfect rule? Is he not lost, straying from Brahma's light, Like the vain cloud, which floats 'twixt earth and Heaven When lightning splits it, and it vanisheth? Fain would I hear thee answer me herein, Since Krishna! none save thou can clear the doubt.

He is not lost, thou Son of Pritha! No! Nor earth, nor heaven is forfeit, even for him, Because no heart that holds one right desire Treadeth the road of loss! He who should fail, Desiring righteousness, cometh at death Unto the Region of the Just; dwells there Measureless years, and being born anew, Beginneth life again in some fair home Amid the mild and happy. It may chance He doth descend into a Yogin house On Virtue's breast; but that is rare! Such birth Is hard to be obtained on this earth, Chief! So hath he back again what heights of heart He did achieve, and so he strives anew To perfectness, with better hope, dear Prince! For by the old desire he is drawn on Unwittingly; and only to desire The purity of Yoga is to pass Beyond the Sabdabrahm, the spoken Ved. But, being Yogi, striving strong and long, Purged from transgressions, perfected by births Following on births, he plants his feet at last Upon the farther path. Such an one ranks Above ascetics, higher than the wise, Beyond achievers of vast deeds! Be thou Yogi, Arjuna! And of such believe, Truest and best is he who worships Me With inmost soul, stayed on My Mystery!

Here endeth Chapter VI. of the Bhagavad-Gita, entitled "Atmasanyamayog," or "The Book of Religion by Self-Restraint"