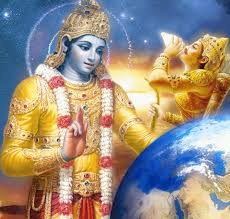 Fearlessness, singleness of soul, the will Always to strive for wisdom; opened hand And governed appetites; and piety And love of lonely study; humbleness, Uprightness, heed to injure nought which lives, Truthfulness, slowness unto wrath, a mind That lightly letteth go what others prize; And equanimity, and charity Which spieth no man's faults; and tenderness Towards all that suffer; a contented heart, Fluttered by no desires; a bearing mild, Modest, and grave, with manhood nobly mixed With patience, fortitude, and purity; An unrevengeful spirit, never given To rate itself too high; - such be the signs, O Indian Price! of him whose feet are set On that fair path which leads to heavenly birth!

Deceitfulness, and arrogance, and pride, Quickness to anger, harsh and evil speech, And ignorance, to its own darkness blind, These be the signs, My Prince! of him whose birth Is fated for the regions of the vile.1

The Heavenly Birth brings to deliverance, So should'st thou know! The birth with Asuras Brings into bondage. Be thou joyous, Prince Whose lot is set apart for heavenly Birth.

Two stamps there are marked on all living men, Divine and Undivine; I spake to thee By what marks thou shouldst know the Heavenly Man, Hear from me now of the Unheavenly!

They comprehend not, the Unheavenly, How souls go forth from Me; nor how they come Back unto Me: nor is there Truth in these, Nor purity, nor rule of Life. "This world Hath not a Law, nor Order, nor a Lord," So say they: "nor hath risen up by Cause Following on Cause, in perfect purposing, But is none other than a House of Lust." And, this thing thinking, all those ruined ones Of little wit, dark-minded - give themselves To evil deeds, the curses of their kind. Surrendered to desires insatiable, Full of deceitfulness, folly, and pride, In blindness cleaving to their errors, caught Into the sinful course, they trust this lie As it were true - this lie which leads to death Finding in Pleasure all the good which is, And crying "Here it finisheth!"

Ensnared In nooses of a hundred idle hopes, Slaves to their passion and their wrath, they buy Wealth with base deeds, to glut hot appetites; "Thus much, to-day," they say, "we gained! thereby Such and such wish of heart shall have its fill; And this is ours! and th' other shall be ours! To-day we slew a foe, and we will slay Our other enemy to-morrow! Look! Are we not lords? Make we not goodly cheer? Is not our fortune famous, brave, and great? Rich are we, proudly born! What other men Live like to us? Kill, then, for sacrifice!

Cast largesse, and be merry!" So they speak Darkened by ignorance; and so they fall Tossed to and fro with projects, tricked, and bound In net of black delusion, lost in lusts Down to foul Naraka. Conceited, fond, Stubborn and proud, dead-drunken with the wine Of wealth, and reckless, all their offerings Have but a show of reverence, being not made In piety of ancient faith. Thus vowed To self-hood, force, insolence, feasting, wrath, These My blasphemers, in the forms they wear And in the forms they breed, my foemen are, Hateful and hating; cruel, evil, vile, Lowest and least of men, whom I cast down Again, and yet again, at end of lives, Into some devilish womb, whence - birth by birth The devilish wombs re-spawn them, all beguiled; And, till they find and worship Me, sweet Prince! Tread they that Nether Road.

The Doors of Hell Are threefold, whereby men to ruin pass, The door of Lust, the door of Wrath, the door Of Avarice. Let a man shun those three! He who shall turn aside from entering All those three gates of Narak, wendeth straight To find his peace, and comes to Swarga's gate. . . . . . . . . . . .2

Here endeth Chapter XIV. of the Bhagavad-Gita, entitled "Daivasarasaupadwibhagayog," or "The Book of the Separateness of the Divine and Undivine"