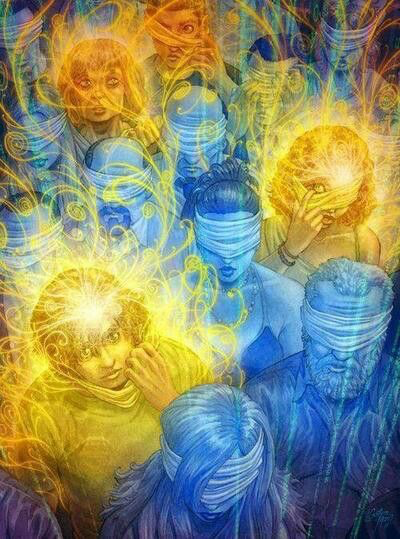 Detachment, in it’s many forms, has always been a big inspiration for thought trains and a core  principle through which I try to orient decision making, which subsequently influences the  life that follows.

Taking a moment to detach from objects, people, and scenarios, can be an incredibly  useful tool for everyday stress relief and really looking at the big picture, often times  giving us the answer we’re looking for. Today I’d like to share with you a few notes from one of those thought trains relating to  the detachment of identification.

There's a popular idea that goes ‘If the environment’s favorable the organism will  reproduce, if not it will choose immortality’ In the scientific sense, it relates to the  reproduction or self-sustenance of cells depending on environmental conditions.

In the analogous sense, if immortality isn’t living forever, but having an impact in our  experiences, then just as the collective environment determines the cells next direction,  perhaps the same applies for ourselfs at the end of life process.

The ‘collective environment’ being the sum of our experience, and state of peace at the  time of death determining the direction of our transition as we leave the physical plane.  Which doesn’t necessarily suggest a heaven scenario, more so it follows the principle of  cause and effect in that energy cannot be destroyed, which doesn’t necessarily deny any heavenly quality from the transition.

So as the seemingly separated exterior and interior aspects of the universe share this  same agenda, then our unconscious defining and separating of these two interrelated  aspects of the whole is what eludes us from it and prevents us from understanding it at a deeper level of truth.

If defining between something that does promote physical or spiritual growth, and  something that would seemingly not is the initial separation that causes the basis for  dispute, then this self-imposed limitation is an example of a dualistic perspective  preventing us from understanding something at a deeper level of truth, and a reminder to us  that beauty is always in the eye of the beholder.

Obviously we all have experiences, people and situations that are more preferable to  us than others, but when we know internally that depreciating something or someone  else’s potential value is untrue, we develop a new found respect and genuine interest  that replaces the previously held ignorance to become part of our genuine self, an  appreciation upgrade.

Objectively, our ability to consciously define between a cup and a computer is a useful  tool, but depreciating one in comparison to the other becomes an ‘Apples and oranges’  comparison. The same being true for defining between people, objects and scenarios. It becomes a subjective process that arrives us within dispute and dualism once again.

Bringing magnetics to mind for a moment: A field attracts things that are complementary  to it. We can read that objectively as an example of handheld magnets, or in a more  subjective manner such as the relationships between people, planetary bodies, or that of the moon and tides.

At a personal level, more favorable people and experiences present themselves within  our lives at the point of refining our situation to one that attracts them, which can be  likened to the idea of the cell that chooses ‘immortality’ until conditions are suitable.

So the experiences that we do want come in greater frequency when we’ve gravitated  away from what no longer serves us. It isn’t uncommon for people who begin  relationships at later points in life to be more successful in this way.

Looking at detachment once more, accepting something is to simultaneously exercise  forgiveness in the sense of letting go, which is to appreciate something isn’t quite feasible to momentarily detach and analyze from a broader  perspective like in times of dispute between two people. So creating that space internally  can become useful to carry around with us in order to see through uncomfortable situations and give us the courage and foresight to work towards a resolution.

Leaving an equation unfinished increases its capacity as a tool to bring ‘more to the  table’ but the extended duration can decrease our capacity as mediators to consciously  resolve the core of the problem at hand.

The longer we stray from a dispute with a person for example, the more healing and  experience we’ll have to put in to our attempts at resolution, but the momentum will need to be re-manifested as the initial experience itself has passed, which could cause the  situation to go either way.

In the case of it going positively, the amount of satisfaction we get isn’t  always as genuine as if we manage to find resolve within the initial experience, still true enough to  resume connection, but the point is somewhat lost and the ability to use the experience  to serve us diminishes, it becomes an obsession of the past.

Undeniably, this process refines in the continuum of knowing who we really are, which  develops more so when we take a step back, away from the externalized dramas, to  understand the subtler relationships within the world and ourselves. Which isn’t necessarily to stay in reflective mode and overly withdraw from situations, balance within any equation is needed to stay unified, but it is the lack of internal clarity and dominance of external focus which has arrived us at where we are today… Which isn’t necessarily a bad thing,  but probably something for us to be aware of.

This is brilliant! The words were deeply appreciated here.

Thanks Emily! Glad it resonated with you

williamalbert
This comment was minimized by the moderator on the site