Religion and the Sacred Ceremony 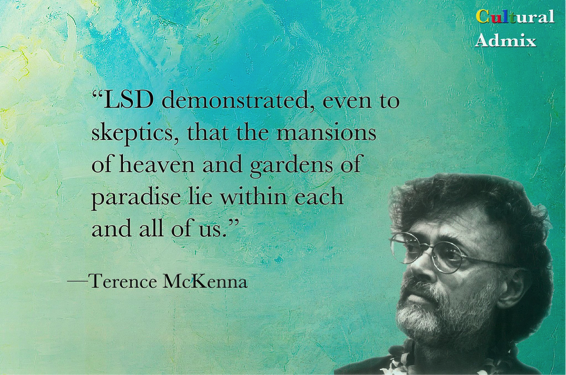 For this months topic of Religion, in it’s many forms, I’d like to look at it’s roots, and ask why it seems to be so taboo, while looking at the qualities and benefits that these ancient practices have to offer.

I was once within a meditation after watching a video on YouTube of Ethno botanist Terrence McKenna’s ‘stoned ape theory’; a theory, which postulates the motion from Ape to Man, was influenced by the use of psychoactive compounds found in nature.
The experiences with these extraordinary compounds could be a major contributor in all we think we know today.

In the meditation, a concept was presented to me which displayed the psychedelic experience that an Ape might have, and how he might communicate this to other members of his troop.  Many of us are familiar with the famous words of Danish Economist Ester Boserup “Necessity is the mother of all invention”, and these words fit quite nicely with this example.
Should an Ape have such a mind-altering experience, it’s probable that there would be a desire to communicate it, and as the balance between having these experiences and the ability to express them outweighs, there becomes a necessity for language to develop further.

Psychoactive compounds, and other consciousness altering substances, have been recorded to have been used within Religious ceremonies and recreationally throughout most if not all cultures of human history. So just what is it that makes these things so curious?


Looking at the Ayahuasca ceremonies of the indigenous people of South America, they use a combination of The Ayahuasca Vine and Chacruna leaves to produce their sacred brew containing orally active DMT; one of the most potent psychedelics known to man.
Christianity’s Moses, and his vision of the burning bush, is viewed to have been a psychedelic experience involving the Acacia bush; a bush with one of the largest DMT concentrations in the plant kingdom. 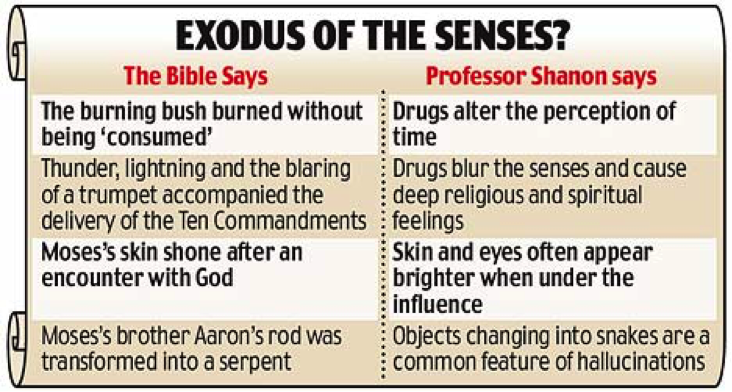 There are many other ‘hidden’ psychedelic references in the Bible, such as the fruit of the tree of knowledge in the garden of Eden which is said to be the white spots from the Amanita muscaria mushroom, and perhaps more controversially, the crucifixion of Jesus to be for his spreading the lessons of DMT. 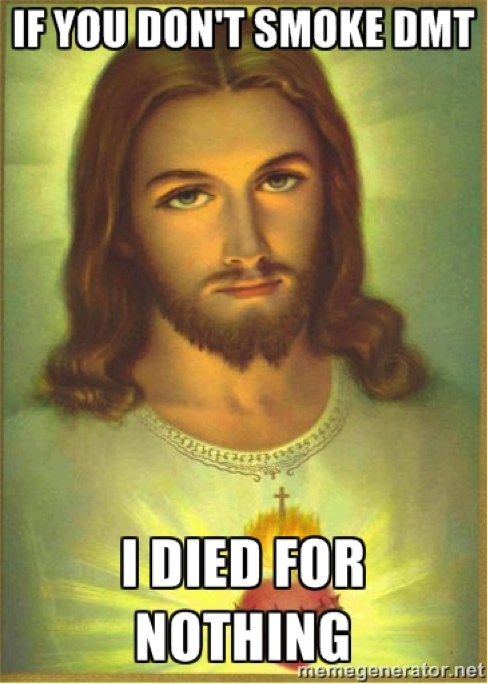 The Ancient Egyptians iconic ‘eye of Horus’ symbol depicts the 3rd eye location at the center of the brain, this is said to be the production center of DMT within humans, the chemical tool which contributes to our extraordinary experiences like lucid dreaming, telepathy, remote viewing and so on. In their hieroglyphics they depict the consumption of mushrooms and an expanded crown chakra and opened third eye chakra, along with an interpretation of the experience itself. 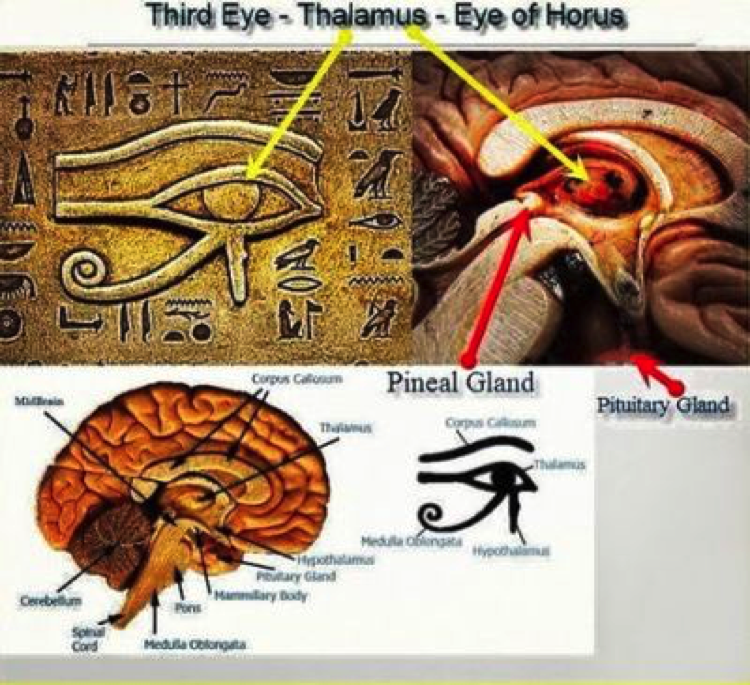 Throughout all ancient cultures, the use of psychoactive compounds for Spiritual and Religious purpose is largely apparent.

Looking at what’s happening today; Creator of Apple ‘Steve jobs’ had attributed a large portion of his personal success to the use of psychoactive compounds whilst other professionals from Silicon Valley explain how micro dosing LSD promotes states of “superhuman creativity”.  Accounts from the likes of Alan Watts, Carl Sagan, Alex Grey and of course Terrence McKenna show just what amazing revelations can be found regarding psychedelics, not to mention the works of MAPS – The multi disciplinary association for Psychedelic studies and their work in treating depression and post traumatic stress disorder. The only real difference in the change of times is that our use of these compounds has become more relative; we’re producing the evidence that the scientific age needs so that it can unify with it’s spiritual counterpart.

From my own personal experience, aligning the use of these compounds with a meditative discipline is a sure fire way to turn an eight hour session into an odyssey of divinity and effortless beauty. They immerse us within source energy; our inner most self, and allow us to process all manner of scenarios from our highest state of being, from which the insights and epiphanies stay with us and inspire us as we continue to create our life experience. 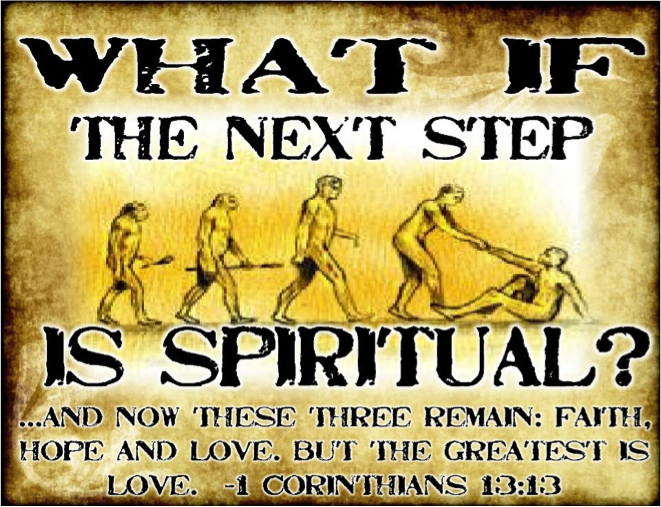 So why wouldn’t we want to communicate these experiences of divinity and personal truth? Fear seems to be the only cause, and this seems to be our situation with religion today. During the time of our primal ancestors development, communication of such experiences wouldn’t be bound by the human conditions of today.


The further we detached from nature the less familiar we became with the truth and the more likely we are to reject anything unfamiliar through fear of being incorrect. Conflicting views arise and violence becomes a potential. Our fear of losing the truth is what drives us further from it.

If the focus is on truth rather than fear, the goal becomes one of  how much we can relate to each others story,  how much it aligns with our interpretation of the truth, and so our indifferences are cast aside in favour of the much more valuable commonalities. Because at the heart of the matter, Religion simply believes in another’s experience, and belief, is a question of whether we want to find truth within the other persons experience. This is easier to do when we say ‘Hey, look at the evidence’, but a little harder when we need to exercise trust, though if we wish too, we can find truth within anything we have the ability to understand, and the ability to understand is down to the effort we put in; we get what we give.

From one perspective, it could be said that Religion is the source of most of the world’s conflict today; another might say that we are responsible for most of the conflict today. The way in which tools are used does not reveal the usefulness of the tool, it reveals that of the user. We could use a spoon to draw a picture, this doesn’t make the spoon useless, the way in which it’s used isn’t so great, but it’s a perfectly functional spoon all the same. 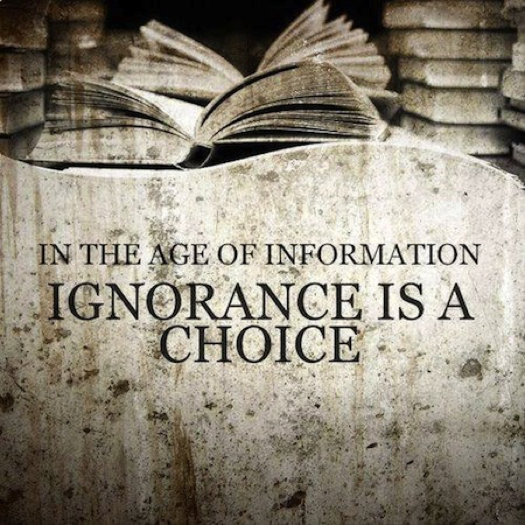 Similarly with Spirituality and Religion,  it is a very well developed tool that when interpreted and used for its intended purpose, brings all manner of miracles to everyday life.

When we look at the overwhelmingly positive evidence of what trusting in another’s experience does bring, we can see that there is so much potential to be found within Religion. Trust is exactly that which is responsible for the relationships we cherish; trusting in the ideas of other’s is what brings us the benefits of our standard of living today. Not a single thing was ever accomplished without a decision in the direction of faith; the trust that we can achieve. 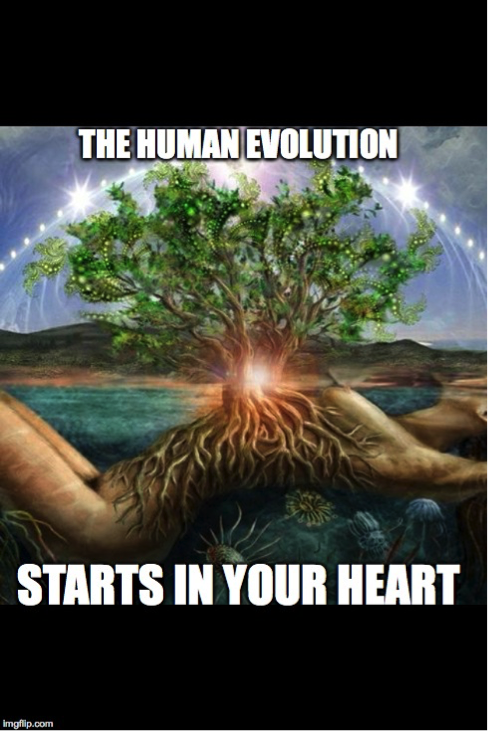 No doubt if you are here and reading this article, then you have had some form of experience or insights that could be explained as spiritual, and even religious in nature. Now imagine if everyone were able to gain the benefits from these insights, imagine how perfect a world we could create if we were all able to share techniques of manifesting the divine and formulate them into a tool for spiritual and personal development?
Whatever we choose to label this process, at its root it is human nature, a process of evolution. I would like to include a video link to a fairly recent upload from the Spirit Science team, which in five short minutes gives some lovely insights as to the progression of Religion and how that corresponds with the global spiritual ascension happening today.

Josie
This comment was minimized by the moderator on the site

Many thoughts to share here, but before all things, a fabulous article here today. I recently saw the Steve Jobs movie with Ashtin, and did notice they paid attention to how his creativity first began to flourish through psychedelic...

Many thoughts to share here, but before all things, a fabulous article here today. I recently saw the Steve Jobs movie with Ashtin, and did notice they paid attention to how his creativity first began to flourish through psychedelic experimentation. This was well done, and am glad they gave credit to the source so to speak. There still seems to be a dividing line between psychedelic spiritual practices of the old ways, and the modern law driven religions. This is natural i feel, as distinct minds need distinct forms of inner expression.

And finally, I absolutely love the delivery of all these spirit science productions and I thank you for sharing this one Mat. Happy holidays to each of you out there.

Not sure how i missed this article, but wow! full of awesome thoughts to digest. Never a dull word from this guy. Thanks mat.:o:o I do agree that most of the religions we know today began with a degree of psychedelic mystical experience whether...

Not sure how i missed this article, but wow! full of awesome thoughts to digest. Never a dull word from this guy. Thanks mat.:o:o I do agree that most of the religions we know today began with a degree of psychedelic mystical experience whether documented or not. The mother has countless ways of awakening us through here fruits. The shamans know this, but they just don't write down their religions and promote their methods around the world. lol

Thanks Tara! Maybe within this age spirituality and shamanism will get a face lift and influence the modern world as Religion has in previous times