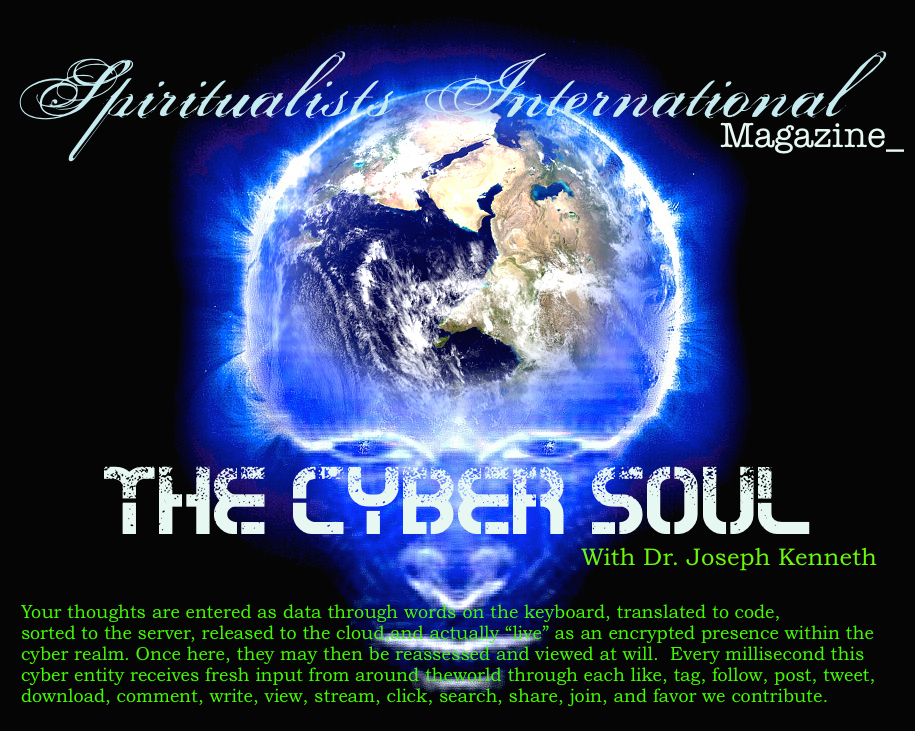 As a user of the internet, I ask you to consider: how many times have you liked, tagged, followed, posted, tweeted, downloaded, commented, written, viewed, streamed, clicked, searched, shared, joined, or favored, within the realms of cyberspace? Chances are you can’t even guess; the number could be somewhere in the tens of thousands or even more. And, while there is nothing wrong with all of this cyber activity, it must be acknowledged; cyberspace has become a nearly faultless reflection of our own conscious thought patterns, both at the individual level, and as a collective hub. Simply through the aggregation that occurs in our use of a search engine, the traces of each personality and thought are imprinted into a gestalt of cyber activity. And when we include all of the methods of adding and altering data represented by the more specific activities listed above, we can almost see how it could be possible to impeccably observe the mind of any individual engaged in cyber space.

As we focus deeper on technology this month, I invite you to take a journey with me into the realms of cyberspace, undoubtedly a collective human psyche, and, perhaps, the very soul of the world, to examine exactly what is happening as a result of this technological explosion.

Quite simply, the more thoughts, opinions, emotions, and “time” we input into cyberspace, the more accurately it mirrors our own minds at the conscious level.  As we grow increasingly more attached to this cyber entity, we nourish it, and it’s actual “presence” becomes a reflecting, yet unseen entity.

Realize that behind each screen you view, many thousands of lines of code are creating the visual images, as well as receiving and storing the data you enter. Your thoughts are entered as data through words on a keyboard, translated to code, stored to a server, released to a coud, and actually "live" as an encrypted presence within the cyber realm. Once here, they may be then reassessed and viewed at will. Every millisecond, this cyber web of information remains constantly fed with human input, making its presence accepted as a reality in our paradigm.  But beyond this, we begin to accept that there is, indeed, a vast cloud of information and intelligence, which understands how to respond and interact to us based on the input of our human minds.

So we can define cyberspace as,

“Cyberspace is a domain characterized by the use of electronics and the electromagnetic spectrum to store, modify, and

exchange data via networked systems and associated physical infrastructures. In effect, cyberspace can be thought of as the interconnection of human beings through computers and telecommunication, without regard to physical geography.”

Cyberspace, by this definition, is not merely the computer systems and their data, but also the activities that we engage in through those systems.  Our actions create cyberspace, both by contributing to the amalgamation of data represented, and also as active elements within its overall system.  Thus, it is inevitable that cyberspace be a mirror of the human mind, a collective consciousness that we have manifested into a form of reality.  In essence, cyberspace is a mirror of our own conscious thought patterns, but what of our sub-consciousness?  Lets look deeper at some concepts that can help explain where our subconscious minds meet in a similar sea, not as cyber code; as vibratory code.

You may already be familiar with Carl Jung’s insights surrounding the collective unconscious. Jung realized that as a human entity containing collective thoughts, beliefs, and emotions, we are constantly sharing underlying vibratory energies that, in turn, hold a common paradigm in place through our unconscious human activities.

We define the collective unconscious as,

Collective unconscious is a term of analytical psychology, coined by Carl Jung. It is proposed to be a part of the unconscious mind, expressed in humanity and all life

To advance our examinations here one step deeper, lets look at a third and final concept. Some readers may be familiar with the Latin words of the Anima Mundi, or, soul of the world. 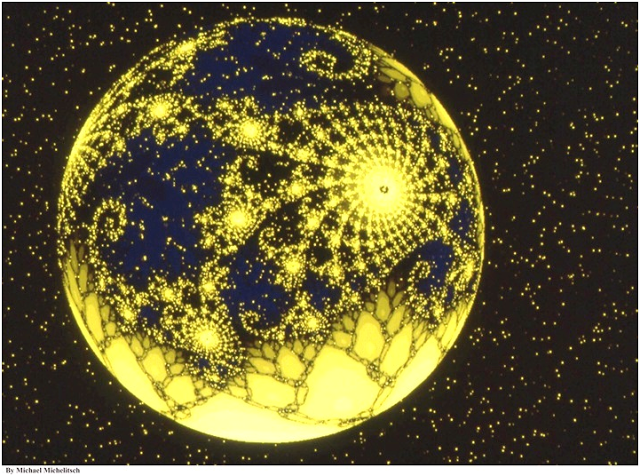 “The world soul (Greek: ψυχὴ κόσμου, Latin: anima mundi) is, according to several systems of thought, an intrinsic connection between all living things on the planet, which relates to our world in much the same way as the soul is connected to the human body. The idea originated with Plato and was an important component of most Neoplatonic systems:

“Therefore, we may consequently state that: this world is indeed a living being endowed with a soul and intelligence ... a single visible living entity containing all other living entities, which by their nature are all related”.[1]

At core, this concept is the recognition of the Earth itself as a living organism, with billions and billions of smaller life forms residing upon it, and within it. Each of us is a part of this being, and we each constitute a node in a network that includes all life upon this planet.  This network stores and shares energy and information across the world.

If we begin to understand the composition of this energy which bonds every last aspect of our world, sustaining a soul like quality, then we can begin to reflect in a more meaningful way on cyberspace. What we can draw from the concept of Anima Mundi, is that when a collective network of information exists within any realm, whether seen or unseen, it achieves a living quality through the input of conscious beings. Every thought, word, emotion, action, and belief resonates a frequency into an unseen field of spiritual intelligence.  So too, every like, tag, follow, post, tweet, download, comment, view, stream, click, search, share, join, or favor, resonates a code into an unseen field of cyber intelligence.

Whether we place a conscious thought into cyberspace, an unconscious belief into the collective unconscious, or an emotion from our being into the anima mundi, we are contributing to the nature of something beyond our “self.” The explosion of cyberspace has been a critical step in realizing that we can achieve connectivity beyond geographical limits, and that our collective thoughts can be stored beyond the confines of our physical brains. The human being, as with any being on a path of evolution, must evolve in a sequential manner, learning step by step. Today, we can at last understand the unseen as a tangible database of real information via cyberspace. As we continue at full velocity in our enthusiastic journey, the higher realms of existence draw closer and closer to being an accepted and acknowledged aspect of our reality.

The question of pertinence then becomes, at what point do we grasp a reality of our actual oneness. Yes, there seems to be a feeling of individuality here on earth as we go about our daily tasks, believing that we are operating only within the headspace of our brain, making our “individual” decisions to better our “individual” lives. But I ask you to look a bit deeper after reading these words, and ask yourself, where is humanity moving collectively as one conscious entity? How are you and I constantly connecting and evolving this one consciousness that has always existed throughout the entirety of creation? We need not a one-world government to understand oneness; we need simply understand our collective journey as one human entity through the presence of our reflecting cyber space. We have planted the seeds of universal comprehension through our own technologies; we need now use these tools of comprehension to expand the horizons of our human existence.

He’s the North American Metaphysician, Musician, and Author who lives in Chile. Dr. Joseph Kenneth Boettcher, Alumni of the University of Metaphysics, has worked diligently for years teaching astral projection students and inspired spiritualists around the globe. At the group and individual level, he shares with those truly committed to higher learning within the spiritual paths of enlightenment. His focus remains on teaching the student to leave the body first, that they might receive their personal and unique experience of spiritual education. He seeks, at heart, to impart the understanding that within the astral state there is no mediator between the seeker and the experience of spiritual education.

Because of his international teachings, Joseph has gained experience in working with peoples of distinct cultural backgrounds, religious backgrounds, daily habits, sleeping patterns, and spiritual goals. It was through this extended experience in guiding others onto out of body states, that the program developed in his book Life is But a Dream, was birthed. Over the course of almost three years, working intensely with astral projection students around the world, while at the same time involved in profound spiritual studies, the books curriculum was meticulously constructed.

Joseph’s experiences have guided and inspired him to present this method of self-illumination to a wider audience. Joseph’s initial out of body experiences intensely unlocked his Kundalini energies and completely transformed his physical life. His astral travels have carried him to realms of unimaginable encounters with ancient mystics, as well as planes of profound cosmic unity. The intensity of each astral experience has been drastically life altering for him.

As a member of The International Order of the Gnostic Templars, Joseph is passionate and active in sharing the ancient mysteries of Gnosis and Goddess traditions. He continues to teach the forgotten mysteries at the individual level, as well as through intimate gatherings. His deeply felt philosophy that personal truth can only develop through person experience and that by learning to astral project, this experience may commence, and self-illumination may begin, continues to inspire and elevate consciousness within his circles.

Joseph is also affiliated with the Worldwide Metaphysical Ministry and serves as a Metaphysician.

This is really something to ponder. Im almost shy to comment here. lol But seriously, quite a bit of wonderful info to digest. I was familiar with Jung and the Anima Mundi from some Hermetic background but never put all of this together in my...

This is really something to ponder. Im almost shy to comment here. lol But seriously, quite a bit of wonderful info to digest. I was familiar with Jung and the Anima Mundi from some Hermetic background but never put all of this together in my mind. Very fascinating words here. I will share it where i can.

Not gonna lie, this is kinda scary to think about. But thanks for putting it all together for us who didint realize whats happening out there. Im wondering if im the only one who thinks this.

Well said. As long as we keep using the machines and they don't use us, we'll be fine.

Awesome article Dr. Joseph!! This is a perfect comparison.